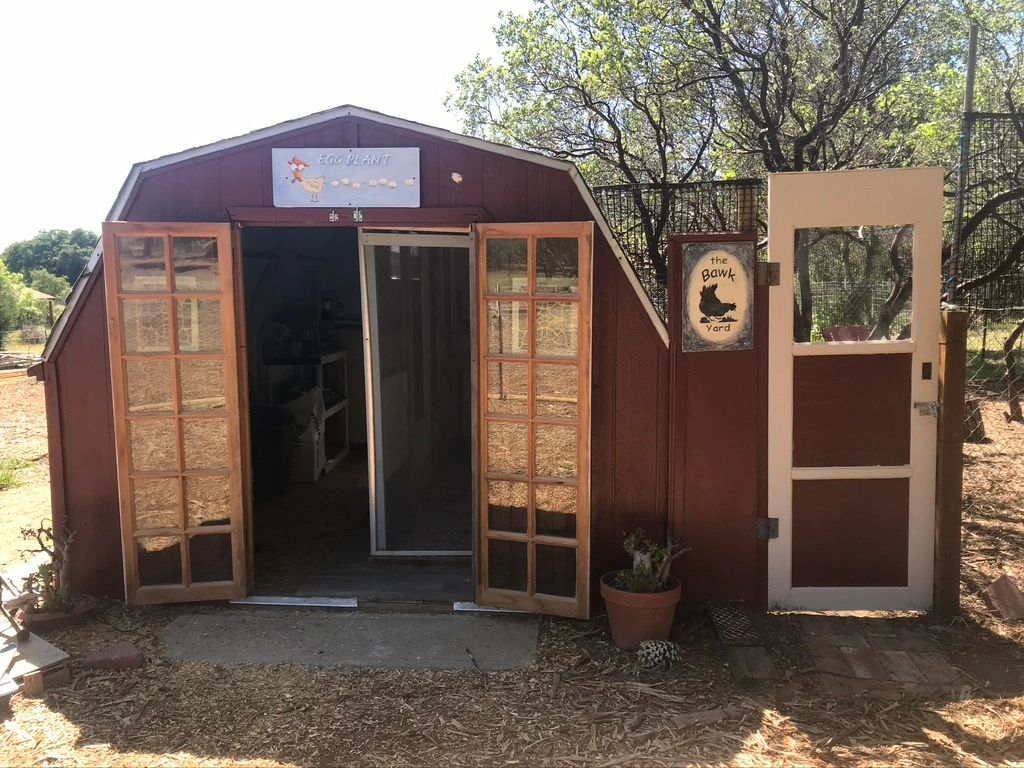 We repurposed an old shed to make a coop for our flock.  It is predator proof and shelters them from the weather.  The BAWK Yard is approx. 1400 square feet with  9 ft high fencing around it. The chickens yard has lots of shade from Manzanitas and a small Oak tree.  Wild Grape vines grow up the trees

Dali is our accidental Roo .  He was a surprise and has turned out to be a magnificent bird. He is a White Face Black Spanish and they are a rare breed.  Once this breed was a very popular breed as the hens lay a good number of large white eggs.  It is thought to be the oldest breed in the Mediterranean class of poultry and fowl . When the dual purpose breeds came into favor, the WFBS  numbers began to decline. These birds are now listed as critically endangered by the Livestock Conservancy. When I realized that one of the two day old WFBS chicks that I had purchased was looking like a rooster, I was quite excited but also concerned at the same time.  I was excited at the idea of possibly breeding them and giving babies away to help get their numbers up.  My concern was due to the fact that roosters can be loud and I don't want to annoy my neighbors.  I began to research the no crow collars that I had read about.  It seemed like a great option so we invested in one and when he began to crow, we put the collar on him.  After letting him get used to it we began to slowly to tighten the collar and after several weeks of moving very slowly, his crow was very quiet and not as loud as my hens when they are singing their egg laying song.  Dali can barely be heard when he tries to answer the other couple of roosters that live in the area that are pretty loud.

Things felt pretty good but I always worried about the collar getting too tight as he continued to grow. All of our neighbors were happy to hear him and said his crowing didn't bother them, but we were feeling stressed about noise, especially early in the morning when most roosters will crow to let everyone know "the day is beginning"!

I felt that things were ok with the situation but still wondered if this collar was really a good option for our boy.  It seemed unnatural and I wondered how uncomfortable it was for him.

He began to show some typical roo behaviors that were less then desirable and I made the difficult decision to find him a  more suitable home were he would have his freedom.

I was happy to run across a post from a fellow farmer in the area that uses roosters and hens on his 7 acre farm as natural bug control.  I contacted him and he agreed to take Dali.  I was happy with this opportunity to give Dali a better, more natural life with freedom from a collar and no crowing issues.  He will be living a free life as a member of a bug control unit.  He will be with other roosters who can teach him some manners that he lacks at this time.

He went to his new home on August 1st.  His new flock tender was so enamored with his he asked me if I would consider trading Clarabelle (my WFBS hen ) so that he could breed them.  I had to decline the trade as Clarabelle is a  member of our family.  Dali may miss his hens and they may miss him too in the beginning, but I'm sure they will all survive this change.  I think they will all be better off in the end as a result of it.  I know Tim and I will rest easier knowing the collar is not going to get too tight and hurt him.  We also know that our neighbors will continue to enjoy having our fresh eggs delivered to their doors without the risk of wake up calls.

I have received photos of Dali at his new home with his new flock and he looks happy! I am glad to have had him long enough to see his amazing face develop and have some very memorable times with hm.  I have done several paintings of him and the experience of raising him is not one I will forget.

Light Brahma.  Large brown lightly speckled eggs, lays an average of every other day. She's large and in charge!

Cream Leg Bar.  Light blue eggs, Lays an egg a day most days.  Fanny knows how to rock the comb over.

Cream Legbar.  Light blue eggs, hasn't begun laying yet. She got her name by always being on my shoulder.  It made me happy.

Amerucauna / Easter Egger. Blue green eggs, lays everyday on average.   Sally is very athletic and can be frequently found high up in the grape vines or the roof of the barn.

Blue Copper Maran. Dark Brown eggs, lays daily.  Gloria is beautiful and not one to be messed with, she rules the roost,  like her namesake.

Silver Laced Wyandotte. Brown eggs, lays daily but has gone broody early. (hope that's not a trend).  She's a little more social then her sister Maybe, but still not real warm and fuzzy.  But hey we all have our days right?

When I started researching breeds, I knew I wanted to get a Barnevelder.  I chose two day old chicks and only one actually turned out to be this breed.

Bunny was a Blue Barnevelder.  This breed is known for their magnificent  feather colors, large size and heavy egg production. Their eggs are speckled brown.

Unfortunately Bunny had a bad prolapse while laying an egg.  This happens sometimes when they first start laying.  We tried very hard to help her, but couldn't save her.